Making a Difference on the Court!

I love getting email's and letter's from volunteers who are passionate about what they do at Dream Center Peoria. I received this today from Roy, a faithful volunteer who love's coaching basketball. He wanted us to know about his experience this weekend with the Dream Center basketball team. Take a moment to read this.


Gentlemen,I wanted to share this pic with you. This was taken after the boys won their 5th game of the tournament last nite. Great to see the smiling faces!!! The boys finished with a perfect, 5-0 record. They played some excellent teams. Most of the teams they played have practiced and played together for a long time.What impressed me most was not their record, but the way the boys handled themselves on and off the court. There were some heated moments in game 3. The opponent played extremely rough and intentionally did some things to try to get the boys to react. Our boys kept their cool and demonstrated self control. Our boys played hard and never gave up. Most all there wins they were losing and fought back. In fact, in their final game, they were down by as many as 13 points, only to come back to win by 13 points!!! I know this team was not a DCP team, but DCP would have been proud to have their name on their jerseys!!One of the highlights of the tourney, was a dramatic overtime win in game 4. We were down by 3 in the closing seconds. The game appeared to be over, but Christopher Lowe hit a fade away 3 pointer from deep in the corner with 3 seconds left in regulation to put the game into overtime. Christopher hit another 3 pointer in overtime to give the team a thrilling 46-43 victory.The DCP Basketball Program is making a positive difference in the lives of so many boys and young men. ALL for the Glory of God!Praising God for ALL He IS doing...!!!Roy 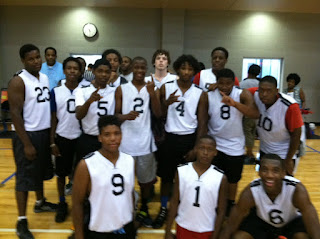