What! A Hip-Hop Church at Dream Center Peoria! 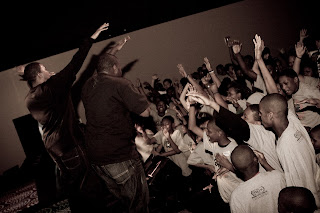 Time to do things Different!
Since the start of the year, Dream Center Peoria (DCP) has not stopped to pause for a breathe. We live to impact families living in poverty, starting with the kids and youth. Thats what makes us get up in a morning. Thats what drives us each and everyday. Seeing kids and young people changed daily, not just  socially, educationally and economically but also spiritually.

Church - DCP Style
So we decided to do something that was totally off the wall. We would start a Hip Hop church called "The Basement." Over the last 6-9 months we had been working with a team of like minded people, from many different churches, to create a Christian Hip Hop experience where there would be a no "Cringe" factor. Where we could address issues that are relevant to a Hip Hop Culture. The Basement would be a place where young people from the inner City would come face to face with the reality of who God is and why he sent his son to a messed up world to die for them.

PROM!!!!
Just days before the launch we realized that we had made a big error. We were launching this on "Prom" weekend. Our hearts and heads dropped. What were we thinking?
I turned to the staff and said "God has called us to do this now, lets not backdown, lets go forward and whoever God want's here, he will get them here"

As we were waiting for kids to arrive, i could sense an excitement in the air, something was about to happen, something that we had never experienced before.

As the kids started coming we realized that Prom was not a factor. We used local christian rappers, DJ's, singers, speakers. We even had a place for kids, who did not go to prom, could get their pictures taken with family or friends.

Lets get this party started!
We were amazed. We had over 130 young people come and experience church like never before. The message was given and over 50 kids responded to the alter call to give their lives to Christ. AMAZING! That would have started a major party in heaven this last Saturday night.

It doesn't end there. Its only the beginning. WE NEED HELP! We saw a massive need to have more adults here to care for the kids, love on the kids and mentor the kids. The service is geared for Junior and Senior High schoolers. If you can help, make a point to be


@Dream Center Peoria, The 1st Saturday of each month from 6pm-8pm
I could not pass up a chance to let you hear some of the music videos that we play at "The Basement"