Its not a show Andy, It's Church! 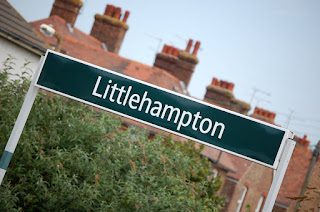 I don't know why but I just felt led to write this entry about Worship. This all started last May. My family and I were on vacation to England and had the chance to go and visit The Smith family down South for a few days.
I remember having a chat with my friend, Martin, (formally with Delirious) as we drove in his mini past the field in Littlehampton, were the famous "Live And In a Can" cd was recorded. That cd, I feel really started to Revolution in worship. It stretched "the church" musically, lyrically and spiritually in worship. It changed the horizon of what we had known as worship at that time. At that time in 1996 Worship had become generic, cheesy, not relevant and to be honest a show that we, "The Church", watched (Sound familiar). Delirious had songs on that cd that would become a soundtrack to a generation who were ready for something new in worship. It had songs like "I'm Not Ashamed, Did You Feel, Obsession and What a Friend I've Found." Plus it had something different on that cd. The spontaneous sections. Delirious phased it "Taking It wherever it goes." They sparked what we know today as "Modern Worship."
There I was at the place were it all started, with the guy who's songs had changed the way we sing about and to God. I was talking to him about worship and how they did worship at his church. My family had just experience being apart of Martins home church where he was leading worship with the guys from Delirious. It was completely different to what I was use to and expecting. It was an amazing time at the church but I noticed something.
Nothing! Thats right, Nothing!
There was no cool backdrops, no lights, no lasers, no stage set. It was just them cramped on a 15 foot by 15 foot corner of a 40 foot stage. The rest of the stage was empty, completely bare which later was used for spontaneous dance. Dance that felt right and in order.
There was no slick power points, the words of the songs were white with a blue background, no moving images or video. There was only chairs around the outside of the room. Most people sat in the middle on the floor with their family. Over 400 people came to church that day, which is a good size church in England considering that less than 1% go to church ONCE a year in England.
So what did I experience..."Everything"
It was fresh, unexpected, spontaneous, real, uncluttered and authentic. People were there expectant, ready and willing to hear from God. As kids ran around the church while service was going on, it was as though we were in a living room with a service going on. The people were real and so was the church service.
The atmosphere was thick with something that "The Church" has lost over the years. It was thick with the Presence of God. I knew that God could break in at any minute and that was cool with them. In fact, thats what attracted the non christian to that church.We worry about what people think of the Presence of God if his presence appears in a church service. Now I know that this does open a door way to the weird and wacky. Thats where Good leadership should kick in. If it pull's attention from God, then it's not God.
In the Presence of God things happen just like in bible times. People were healed, lives were set free, chains were broken in the presence of God. It was at this point when people really saw who Jesus really was and they turned and followed him after being in his presence.
That morning the church had no script, no minute by minute order, no loops or click tracks to make sure the songs weren't to fast or too slow, no cool videos and no trendy newsletters.
I'll never forget those words from Martin that day as I asked him if the worship team used click tracks, loops or videos during the songs that morning.
Martin turned to me and said "It's not a show Andy, It's church!"
The following Link(Songs for a Movement workshop) was recorded this last spring in London at a "Worship Central" event that Tim Hughes (Here I am to worship) heads up. Martin speaks on this whole topic and also does a Q & A with Tim and also Phil Wickham.
Martin Smith at Worship Central
Posted by Andy King at 8:03 PM